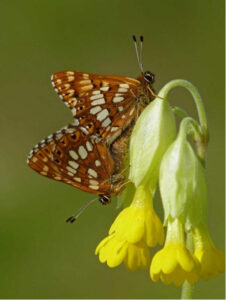 A Rocha UK began the year with some brilliant conservation news: one of Britain’s rarest butterflies has taken up residence at the Steyning Downland Scheme, in Sussex.

Steyning Downland is one of the founding members of A Rocha UK’s Partners in Action, a collaborative network of Christian land managers demonstrating active care for the natural world, now with members all around the UK.

In 2014, Steyning launched a joint project, with a great deal of support from the South Downs National Park Authority, to help bring the Duke of Burgundy butterfly Hamearis lucina back from extinction on the South Downs. The Duke is one of the UK’s rarest butterflies and is extraordinarily fastidious when it comes to setting up home.

The project was led by Sarah Quantrill and her team of enthusiastic volunteers. They opened up new areas of chalk grassland and, with the help of Wakehurst Place, Kew, grew from seed and planted thousands of Cowslips and Primroses (the Duke’s favoured food) out on the downland. Two years later, teams of trained volunteers began surveying the hills for butterflies and carrying out essential ongoing habitat management. But it was only in the spring of 2020, that the Duke finally made his appearance!