Greta goes to the UN 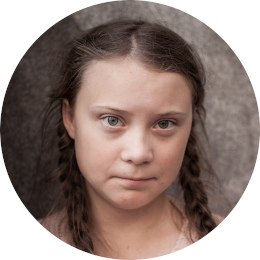 By Rev Dave Bookless, Director of Theology, A Rocha International

When Greta Thunberg speaks, the world listens. How is it that a 16-year old Swedish schoolgirl, unknown just over a year ago, has become one of the best-known faces and voices on the planet? And what about her message? The controlled anger with which she calmly addressed the United Nations this week was extraordinary, as she rebuked world leaders:

‘How dare you! You have stolen my dreams and my childhood with your empty words. And yet I’m one of the lucky ones. People are suffering. People are dying. Entire ecosystems are collapsing. We are in the beginning of a mass extinction, and all you can talk about is money and fairy tales of eternal economic growth. How dare you!’

Do watch her entire speech if you can:

As I watched Greta speaking, I found myself asking, ‘Is this a prophet?’ For some years I’ve been praying for a unifying figure to inspire the climate movement. The issues are so enormous and so complex. Politicians seem largely mired in short-term thinking, compromised by self-interest, or puppets of powerful economic influencers. Where is the Wilberforce, Gandhi, Mandela or Martin Luther King for people to rally around today? Biblically, of course, there is precedent for God raising up somebody from beyond the faithful to fulfil his purpose. The pagan Persian King Cyrus is described as inspired by God (Ezra 1:1-8) and as God’s ‘shepherd’ (Isaiah 44:28).

Greta has stirred strong reactions. Last weekend an estimated four million people worldwide joined her strike for the climate. She has been credited with inspiring a doubling of the European Green vote in the 2019 EU elections, and with influencing governments to declare a ‘Climate Emergency’. Yet, she has also been attacked, sometimes with extraordinary vitriol, accused of being simplistic, of being hypocritical and (as I found when I retweeted her comments) by some Christians, as being the figurehead of a ‘new religion’ of climate panic.

So, how do we assess Greta Thunberg from a biblical perspective? She does not publicly claim any Christian faith, and it’s fairly easy to find things to disagree with in what she says. She speaks of never forgiving today’s generation of leaders for refusing to take the necessary drastic action, whereas we believe there is always room for repentance and forgiveness. She supports the illegal (albeit nonviolent) protests of Extinction Rebellion, which causes unease amongst many. Her language is sometimes apocalyptic, encouraging climate anxiety and even despair, and could feed a deep anger against the rich and powerful. Yet, in her despair and rage, her outspoken passion and clarity, she sounds remarkably like Amos or Ezekiel railing against the injustice, corruption and vested interests of their day, or even like Jesus’ ‘Woe to you’s’ in Matthew 23.

Ultimately, the place where I part company most with Greta is in where she finds hope. For her, as for most involved in the global climate movement, hope is found in humanity. This is a crisis we have to solve ourselves, the narrative goes, because we caused it and we are the only ones who can sort it. Only science, education, and direct action, leading to economic and political transformation will get us out of this mess, or at least reduce its worst impacts. Yet, for Christians, the human heart cannot be changed by campaigns, collective action, or new consciousness. Only God’s Spirit can re-order our disordered desires. And, whilst our short-term, proximate, hopes will be dashed time and time again, our ultimate hope is not in ourselves, but in God’s saving work in Christ, through whose death on the cross all things in heaven and on earth will be reconciled to God.

So, where does that leave us in thinking about how to react to the phenomenon of Greta Thunberg? Prophet or not, I would urge us as Christians to listen to her seriously: not just to her words, but to her pain and anger as she articulates what so many millions of young people are feeling. Hearing her speech to the UN, I found myself lamenting anew for God’s groaning creation, repenting for my own compromised lifestyle, committing myself to seeking God’s Kingdom here on earth as it is in heaven, by working for a better world alongside the young people I know. So, please listen to Greta, and also to the young people you know – those in our churches who long to see God’s creation preached about, prayed for, and cared for – and those who currently shun our churches because they sadly believe the Gospel of Jesus has nothing to offer in a time of climate crisis. How shall they hear without someone preaching … and demonstrating … the hope for people and planet that we have in Christ Jesus?