A gift today will support A Rocha scientists working to protect nature at risk, like the Geometric Tortoise and other threatened species around the world. Donate now 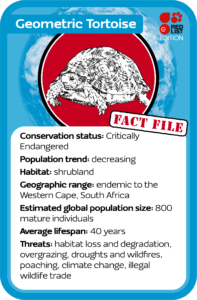 The Geometric Tortoise is one of the world’s rarest tortoises and is found only in the Western Cape of South Africa, in the endangered renosterveld shrubland habitat. When it is full-grown, it measures just 12-15cm in length. The starred pattern on its back may offer camouflage in grasses and the brush, hiding it from potential predators like baboons, jackals and ostriches, as well as introduced mammals such as dogs, rats and cats.

Up to 97% of the renosterveld habitat of Geometric Tortoises has been lost due to human development – largely for agriculture such as wine and wheat farming – and wildfires. Additional threats include invasive plant species replacing the tortoise’s native food plants, predation and overgrazing by livestock. Climate change, resulting in the increased frequency of droughts, is likely to place further pressures on already fragmented and vulnerable populations. And although uncommon, the illegal collection of tortoises for the pet trade is also a potential threat.

What A Rocha is doing 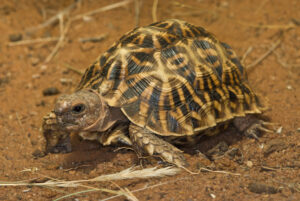 In addition to the Geometric Tortoise, South Africa is home to 13 other terrestrial tortoise species, the highest diversity of any country in the world. However, a substantial number are held illegally and without the correct permits. So in October 2020, A Rocha South Africa and FreeMe Wildlife KZN entered into a partnership to re-wild captive held tortoises with the goal of releasing them into protected areas. Whilst limited to species found in KwaZulu-Natal (Leopard Tortoise, Natal Hinged Tortoise, Speke’s Hinged Tortoise and Bell’s Hinged Tortoise), the rehabilitation protocols developed and perfected though this project will enable the implementation of tortoise rehabilitation projects in other parts of South Africa and around the world.

The first stage of the reintroduction process is to house the tortoises in specialized enclosures for a period of no less than three months. During this time, they are weaned off their usual diet of kitchen scraps and onto food found in their natural environment. They are then transported to the area of final release and placed in acclimatization pens for six months where they learn to find their own food, water and shelter and their health is carefully monitored. After this, they are released into the wild and continue to be monitored by satellite and radio trackers for the next 12 months.

At the same time, an education programme focused on social media engagement is helping to raise awareness of the plight of tortoises and the rehabilitation work conducted by FreeMe and A Rocha South Africa.