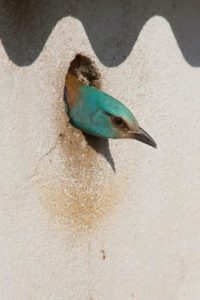 The largest-scale study to date into the migration of the European Roller Coracias garrulus was published in July. Rollers from multiple populations across Europe, including A Rocha France’s study sites, were tracked on their flights to and from southern Africa, using geolocators. The data was used to assess the extent to which these different populations mix on their wintering grounds. For most bird species, very little is known about this subject, but the Roller results showed that the wintering quarters for the different populations are large, with a moderate level of overlap. Since the Roller has declined by 20-30% globally during the last decade, this is good news, as it reduces the vulnerability of breeding populations to localized habitat loss on their wintering grounds. The study also showed that all the birds made prolonged stopovers in spring and autumn, demonstrating the importance of site protection in many African countries for these stunning birds.

‘It was exciting to be involved in such an ambitious project,’ says Timothée Schwartz, A Rocha France’s Scientific Director. ‘With the help of volunteers and interns, we managed to catch twenty adult Rollers and attach geolocators at our main field study sites in Provence and Roussillon, Then of course, we had to relocate and recapture as many as possible the following year, to retrieve the data!’

Read more at ‘A pan-European, multipopulation assessment of migratory connectivity in a near-threatened migrant bird’ by Tom Finch et al.