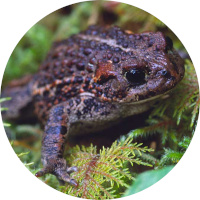 Q: Why did the toadlet cross the road?

A: Because it didn’t have a drift fence to guide it.

It’s no joke: toads return every year to the same wetlands to breed – crossing roads if necessary. After the eggs hatch and tadpoles turn to toadlets, it’s their turn to make the trip back to the surrounding forests. It’s no wonder that road mortality, along with habitat loss and chytrid fungus infection, takes a heavy toll on toads.

The team at A Rocha Canada’s Brooksdale Environmental Centre, in British Columbia have been surveying the Western Toad Anaxyrus boreas since 2013, which has become particularly scarce in southwestern British Columbia. The Brooksdale team searched 58 suitable sites in the region, and only found one where toads were breeding. They have since been trying to protect the toads and raise awareness of this special species.

Each spring (February – April), the team conduct road surveys of adult toads migrating from the surrounding forests to the wetland, and in the summer (June – August) they survey for juvenile toadlets emerging from the wetland. The migration data is now informing public policy in Langley – planners are designing toad-friendly roads and vegetative buffers to enable safe road crossings. In addition, the A Rocha team has installed 400 metres (440 yards) of drift fence to guide toadlets under the road, preventing the mortality of thousands of individuals.

In 2018 and 2019, the Canada team organized ‘toad tours’ – guided walks to see the toadlets migrate. This year the tour has been called off due to COVID-19 restrictions… but (wild)life goes on! For your enjoyment and wonder, check out this clip filmed last year of toadlets being guided through the drift fence.

Photo and video by A Rocha Canada