When will seabird chicks fledge on Mt Karioi? 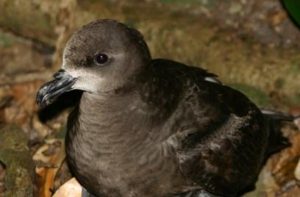 This year over 200 volunteers gave 4,600 hours to restoring Mt Karoi, near Raglan, New Zealand. They want to make it a safe place for native wildlife, especially ground-nesting seabirds. Since 2009, when the project began, volunteers have spread 600 traps over 2,000 hectares, dramatically reducing the numbers of non-native predators.

As a result, quite a number of Grey-faced Petrels Pterodroma macroptera (also known as Oi) flew around the cliff tops at night during the last few months, calling, checking out and occupying old burrows. Kristel van Houte, Co-Director of A Rocha Aotearoa  / New Zealand, was filmed in this two minute video expressing her hope that some would breed. In late October, visiting seabird experts from the University of Auckland used a ‘burrowscope’ in the hope of seeing incubating adults or chicks deep underground. ‘We were very disappointed,’ says Kristel, ‘as every burrow was empty! Even the ones where we had seen pairs quite late in the season. However, most Oi don’t breed until they are seven to ten years old, so we think they were probably young birds looking for mates or nest sites for next year. It’s huge progress to have prospecting birds back at the old colony and we are very hopeful for the future. Next spring, as well as further intensive predator control around the colony, we also plan to monitor the burrows using cameras.’