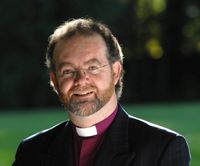 James Jones became Bishop of Liverpool in 1998. Over the last 12 years he has been deeply involved in Urban Regeneration – 45% of the parishes in the Diocese of Liverpool are Urban Priority Areas. He chairs the Governing Body of the faith-based St Francis of Assisi City Academy, jointly sponsored by the Roman Catholic and Anglican Dioceses. It is the first Academy to take the environment as its specialism.

Working in partnership with a number of agencies he has set up Operation EDEN which is an organisation working across the faith communities engaging local people in the holistic transformation of their environment. Quoting the African proverb “We have borrowed the present from our children,” he believes that young people are much more alert to the need to create cleaner, safer and greener communities.

He believes that there is a real tension between community-led regeneration and programmes that are centrally driven. He feels that these tensions are often revealed in the language that is used. People living in local communities tend to use organic language such as “seeds, planting and renewal;” those who control the money tend to use mechanical language such as “triggers, buttons, levers and targets.” He is convinced that you cannot have mechanical solutions to organic problems and that those with the money and the power need to understand more fully how communities die and live again.

He is a member of the House of Lords, Chair of the Council of Wycliffe Hall in the University of Oxford, Co-President of Liverpool Hope University and a Vice President of Tear Fund.