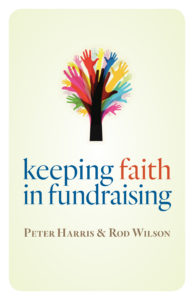 A biblically grounded call for Christians to engage in fundraising as ministry.

Fundraising has always been an essential element of the Christian life – churches, schools and many other organizations rely on it. But it is a risky enterprise, fraught with questions and challenges. How can Christians raise funds with integrity?

In this book, Peter and Rod lay the biblical foundation, based on 2 Corinthians 8-9. They then develop seven themes central to the giving and receiving of money, offering valuable insights from their many years of experience, raising funds for education and conservation. The book closes with ‘Rod’s Story’ and ‘Peter’s story.’

Rev Peter Harris is the Co-founder and President of A Rocha International.

Rod Wilson served as President and Professor of Psychology and Counselling at Regent College, Vancouver, from 2000-2015.

On our very first meeting fifteen years ago we began talking about fundraising. For both of us it had been a major component of our working lives and as we talked we realized we had been on a considerable journey. That journey had been one that began in reluctance, and had continued in occasional exhilaration, frequent bafflement, almost constant frustration and, even emotional turmoil. Now, we realized, we were coming into a new season where we had both sensed a renewed calling to fundraising as ministry. Over the next ten years we continued to share stories and learning until we finally realized it was time to draw some of the threads together so we could understand better what we had lived through, and where we might be going in this very demanding part of our working lives. We had begun to realize that we were not alone in the complex set of reactions that the challenge of both fundraising and giving evokes in many people and so we were encouraged to write this book.

We wanted to examine the relationships that lie at the heart of fundraising which faithfully reflect the character of the Triune God. We wanted to bring fundraising back where it belongs within normal Christian life and work, inspired by the Holy Spirit, modeled on Jesus, in conversation with our loving Father. We wanted to establish some solid biblical foundations for what is almost intrinsically and intentionally a risky enterprise, rather like the farming and fishing that scripture offers as model activities for all growth that is begun, continues, and ends in faith. So what follows is the fruit of our own learning, and conversations with literally hundreds of both donors and fundraisers …