Kingfisher’s Fire: A story of hope for God’s earth 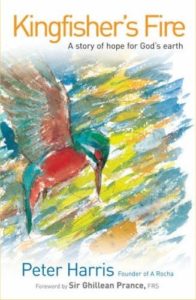 In Kingfisher’s Fire, Peter Harris, Founder and President of A Rocha, describes the story of the remarkable growth of A Rocha over the last ten years; from one field study centre in Portugal to a family of wonderfully varied community conservation projects in eighteen countries:

“Our own family has lived these last fifteen years partly as protagonists but mostly as almost incredulous observers of how one small environmental initiative in the south of Portugal could have given rise to a world-wide family of projects. I could have attempted to chronicle the journey earlier, but we have always believed that the A Rocha story is better told through being lived rather than by any talking or writing. Furthermore, it has been a story which is more authentically lived by a few people in a particular place rather than being told in an abbreviated version at a conference, or even through the pages of a book. However, with so many different local expressions of the A Rocha vision now having an impact and with the foundational notes of the vision now finding a resonance with so many people in so many different cultures and contexts, it seems as good a time as any to take the telling of the A Rocha story further…”

“I highly recommend this book for the conservation professional and for the practising Christian alike.” Stella Simiyu: Programme Officer, Global Strategy for Plant Conservation, Kenya

“Peter Harris is a persistent and most convincing witness that the Christ who saves and the Christ who creates are one and the same.” Eugene Peterson, author of The Message