A Rocha provides a Christian perspective on climate change 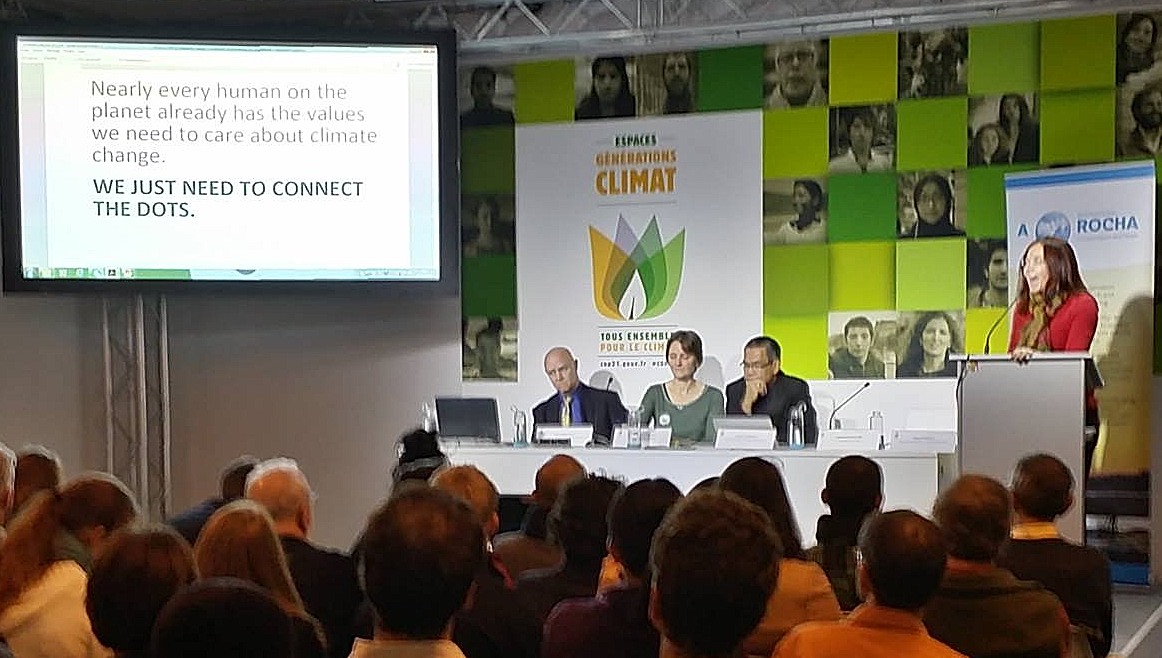 ‘Let’s use love to consider how our actions are impacting other people,’ says Katharine Hayhoe, seen here at COP 21.

Watch Katharine Hayhoe’s 25 minute presentation at ‘Earthkeeping: a Climate for Change’ hosted by A Rocha Canada and Regent College in May 2015.

See the message children and youth in Finland sent to COP21:

At COP 21 in Paris, December 2015, A Rocha worked with partners (including Tearfund and the Lausanne Movement) to advocate for climate-based creation care and engaged COP attendees and campaigners in two major events. Read more

Listen to Katharine Hayhoe, Bishop Ephraim Tendero and others speaking at COP21.

Our presence raised the profile of faith communities and their active role in the world of conservation. One direct result was an invitation to A Rocha International from IUCN to be part of the Spirituality Journey at the IUCN World Conservation Congress.

Follow A Rocha International’s Planetwise blogs at blog.arocha.org for regular posts which include climate change comment e.g. A fair COP? and Climate theology, a ‘primer’ for Christians on the reality of climate change.

For churches in Canada:

Good Seed Sunday: was launched in 2012 to inspire, equip and mobilize church members from many denominations across Canada to care for creation. Free downloadable resources include a section on ‘Living lightly’.

For churches in Wales & England:

Eco Church was launched at St Paul’s Cathedral, London, in January 2016. It consists of an online survey and suite of resources enabling churches to become more environmentally-friendly, from creed to coffee, invocation to insulation and worship to wildlife. The free resources give lots of support and advice, so even if you live in other parts of the world you are welcome to use them, although the awards (at Bronze, Silver and Gold levels) are only for churches in England and Wales.

Hope for Planet Earth – A Christian response to Climate Change:

This downloadable package contains professionally-filmed 15 minute presentations on the science of climate change, impacts on the poor, impacts on biodiversity, the biblical and moral basis for action and practical actions. The clips were filmed as part of the ‘Hope for Planet Earth’ tour in 2009, in which A Rocha UK partnered with Share Jesus International, Tearfund and the John Ray Initiative.