The model we are using to accomplish this transformation is to let both science and theology drive our conservation, education and advocacy efforts. This is all based in a strong connection to and cooperation with local communities.

We determine the range of locally important species, habitats and ecological threats to the focal marine environment. As a Christian organisation, we rigorously study our faith in order to determine principles which guide our lifestyles, ethics, and relative importance of particular issues.

We are committed to working towards the accomplishment of all SDGs. In order to meet Sustainable Development Goal 14 on oceans, faith communities need to be effectively engaged and equipped. Our projects intentionally focus on SDG 14 and highlight interactions with other SDGs where they overlap.

One way you can help our marine conservation work is through our Gifts with a Difference program.

Our work has focused on documenting marine biodiversity and in collaboration with Oxford University, creating the first habitat map for the marine park. We have begun a project focused on the rockpool habitats which house endemic biodiversity rare in the Western Indian Ocean, such as the crisp pillow coral seen below. 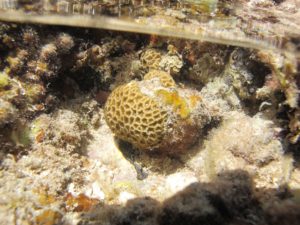 Our biodiversity work has revealed a number of IUCN Redlisted species, particularly sharks, rays and guitarfish. This has been published in Atoll Research Bulletin. We are also studying seagrass habitats to understand their ecology, diversity and importance locally. 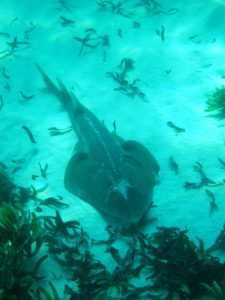 The Karioi project provides an educational program based around a range of habitats from Maunga ki te Moanaincluding; coastal forest, freshwater streams, marine rocky shore and inter-tidal marine ecosystems. The project is actively working together towards an integrated pest control program to re-establish Karioi as a seabird mountain. Currently we are implementing predator control to protect the remnant population of Oi that still burrow around the shorelines of Karioi. 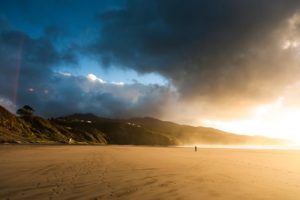 Based near the Kennedy Space Center on Florida’s east coast, projects are focused especially in Cape Canaveral National Seashore and the Indian River Lagoon. We are studying the marine biodiversity, volunteering with a Horseshoe crab study in Titusville and working with local partners to help people experience better health and wellbeing through time in blue spaces. 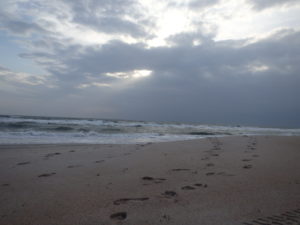 An Ocean of (Plastic) Hope

A Rocha’s research and conservation on marine plastics has focused on helping people to understand the extent of the problem globally and providing resources to help them get involved. We have developed a beach clean up guide so you can organise your own event and The Microplastics Toolbox which has loads of resources to help you learn, act and conduct citizen-science research.

A Rocha national organisations are participating each year in the International Coastal Cleanup. 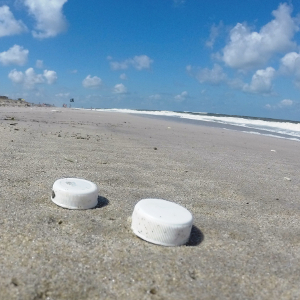 The A Rocha Kenya team lead beach cleanups every Friday and also conducted the first survey of microplastic pollution for this national park. 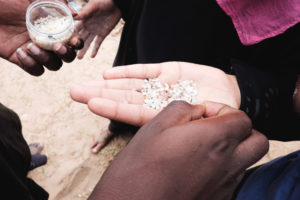 Microplastics are ubitquitous on coasts globally. We have developed The Microplastics Toolbox to help national organisations to monitor microplastics. Currently A Rocha Portugal is monitoring microplastics on the Algarve coast. Nurdle hunts are being used to examine these microplastics in Portugal, Kenya, and USA. 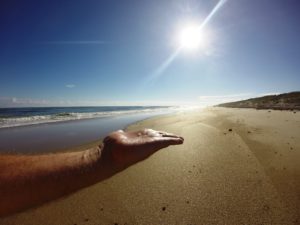 Multiple beaches in the greater Whaingaroa area are surveyed regularly to determine spatial and temporal variability in beach litter which contribute to national litter debris surveys across Aotearoa, NZ. The first method we use is The Sustainable Coastlines – Litter Intelligence: Citizen Science & Education Programme where one large transect is measured from the waterline into the backshore. Launched in May 2018, the programme is funded by the Ministry for the Environment’s Waste Minimisation Fund and works in close collaboration with Statistics New Zealand and the Department of Conservation. We also use The Whaingaroa citizen science litter project –designed with guidance from Ella van Gool (currently completing a PhD on the impact of local waste management practices on beach litter). The main aim of this project is to practically engage the community in the marine debris issue and raise awareness of the impact of plastic / marine debris on seabirds. The methodology is different from the Sustainable Coastlines method as it uses multiple transects and collects larger and smaller items along the wrack line. Debris counts, weights, and categories are recorded based on protocols from the United Nations Environment Programme and the Intergovernmental Oceanographic Commission. Our data, together with other beach survey data, provides a better understanding of litter levels on the various beaches and can aid in evaluating and setting mitigating strategies. 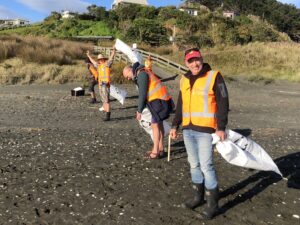 The A Rocha Portugal team are regularly cleaning the beaches and coastline of the Alvor Estuary and the surrounding area along the southern coast of Portugal. Monitoring of microplastics started in 2017 and we continue to study the relative abundance and distribution of the many types of microplastics found on these beaches. 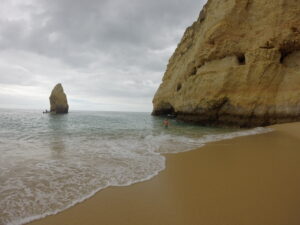 Our field study centre in Watamu is located on the shore of a marine national park where we partner with Kenya Wildlife Service to provide information to help with the management of that marine protected area. Fishermen benefit from the the park through larger fish moving out of the park and being caught, increased reproduction, and eco-tourism job opportunities. 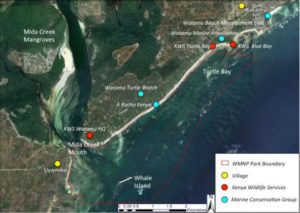 A Rocha Ghana in collaboration with the Wildlife Division of the Forestry Commission has undertaken several activities as part of efforts to restore the ecological integrity of the Ramsar site as well as improve the livelihood of communities utilizing the resources at the Muni-Pomadze Ramsar Site.

The Tana River Delta is one of Kenya’s largest and most important freshwater wetland systems both rich in wildlife and with a significant local community of cattle herders and others dependent on it and who have done so for centuries.  A Rocha Kenya works with other partners to implement conservation initiatives to protect the delta and provide sustainable alternatives for local communities.

Threats to the conservation of Watamu Marine Protected Area include unsustainable fishing practices and development pressures, leading to decline of habitats and species on which the livelihoods of local people depend. In collaboration with the University of St Andrews (marine and coastal environment team), the project is using an approach called a Governance Baseline Tool to bring together local communities and organisations- helping them to agree courses of action that support both conservation and community wellbeing. It is working to identify alternative pro-conservation livelihoods which are environmentally sustainable, and it is supporting the transition towards these activities, particularly amongst marginal groups.”

We are developing resources to help Christians connect their faith to their experiences of the ocean. This includes reflecting on ocean threats such as overfishing, climate change, and pollution. Some of the resources available can be found at our church resources site. Simply type “marine” into the search function.

You can also purchase Dr Robert Sluka’s booklet Hope for the Ocean through Grove Books. 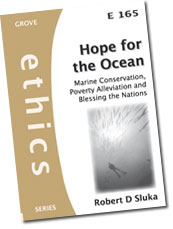 We are surveying permanent quadrats to study bleaching events in this marine national park, including community ecology and resilience of these reefs. Initial results are hopeful, suggesting the reefs are changing and might be becoming more heat tolerant. 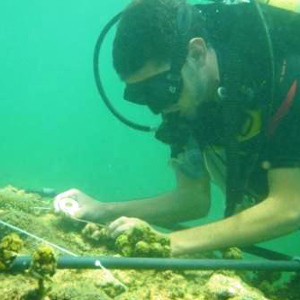 Climate Stewards believes that we are all called to be good stewards of God’s earth, and that voluntary carbon offsetting is a great way to do this. These offsetting projects do not currently deal in Blue Carbon, but the projects reduce impacts of climate change which is an significant threat to marine habitats.

A Rocha Publications and Presentations

Sluka, Robert D. 2016. The Hidden Things of God in the Ocean. Anglican EcoCare Journal of EcoTheology 2:41-50.

Srokosz, M and R.D. Sluka. 2016. Chapter 14: Creation Care of the other 71%. Pages 214-236 in C.Bell and R.S. White (Eds) Creation Care and the Gospel: Reconsidering the Mission of the Church. Hendrickson Publishers Marketing LLC, Massachusetts, USA. 353pp.

Sluka, R.D. and P. Simonin. 2014. Marine Capture Fisheries – A call to action in response to limits, unintended consequences, and ethics. Perspectives on Science and Christian Faith 66:203-212.

Microplastics: On the planet, in the ocean, in sharks. 2020. Ocearch Microplastics Live! Videocast. https://www.youtube.com/watch?v=W-dnC1GTFFY

Connecting to God, Each Other, Nature and Ourselves through the Ocean. Sermon at College Church, Northampton, MA, USA.  https://thecollegechurch.org/speaker/dr-robert-sluka/

What does Resurrection Look Like for the Indian River Lagoon by Robert Sluka. 2018. A Rocha USA blog.

Peace on earth, goodwill to manatees. 2017. A Rocha USA blog.

Loving your neighbor – the case of the Nassau grouper. 2016. My Father’s World blog.

Postcard from the Mediterranean. 2015. A Rocha International Planetwise Blog

R.D. Sluka. 2015 In the Eye of the Barracuda: Beauty in the Ocean. Science and Belief blog

R.D.Sluka. 2013. Is there hope for the ocean? God and Nature. American Scientific Affiliation.